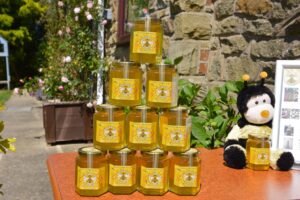 Our honey is extracted directly from the hives here at Staincross. We don’t heat our honey when we are processing it which means that it is in its purest form.

Our honey is only coarsely strained so that pollen particles remain in the honey but the wax from the combs is removed. This sometimes gives the honey a cloudy look. The clearer the honey, the finer the filter, the more flavour is removed- well, in our opinion. Chunk honey contains a piece of wax honeycomb with the honey sealed; exactly as the bees left it surrounded by strained honey to top up the jar.

What is “Raw” Honey?

Raw honey is exactly what it sounds like – honey that is raw, unprocessed, unpasteurized, and straight from the beehive. Raw honey is what bees produce directly in the hive. Raw honey still needs some sort of straining/filtering (unless it’s comb honey still in the comb) because otherwise there would be flakes and bits of wax that comes off the combs during the spinning or crush-straining extraction process. If you want truly raw, and as the bees intended, then you need to buy honey in its comb with the wax cappings still on. UK sellers are not legally allowed to sell honey as “raw” because it’s not a reserved description under the honey labelling regulations.

Don’t be fooled by “organic” on labels!

The European honey bee’s foraging distance has been estimated at up to about 3 miles. So to wear an organic badge, a honey producer will have to prove that its bees have only foraged organically. In the UK, where organic land nestles cheek by jowl with sprayed farmland, this is judged to be nigh on impossible to achieve. Ask questions of the beekeeper if they are selling their honey as “organic” because organic honey in the UK is nearly all imported – primarily from Brazil and New Zealand.

“blend of EU and Non-EU honeys” 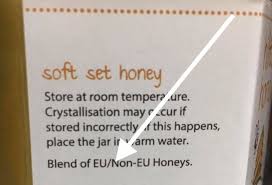 You will see this on nearly all supermarket honey. Over half of Europe’s honey is imported from China. This Chinese-import honey contains little or no pollen at all, having been through an ultra-filtration technique. Without pollen, there’s no real proof of the country of origin (pollen acts as the honey’s DNA). In 2016, the European Commission discovered that 20% of honey imported into Europe was adulterated by the addition of sugars. Cheap syrups are added to the imported honey to increase its volume. Think of that when you look at the price of supermarket honey and begrudge paying a local beekeeper a premium price.

All quality honey crystallises over time. The honey can be reinstated to its runny consistency by loosening the lid and gently warming the jar in a bowl of warm water.