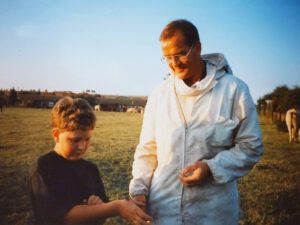 George the friendly beekeeper. Me with a drone on my hand.

My fascination with bees started with one key event. A chance encounter with a swarm of bees that landed in our field and the kind and engaging beekeeper who came out to take them away.

Now you may think I don’t look the type to be a beekeeper – I don’t have a beard and I’m not sixty or retired – but to be honest beekeepers come in all shapes and sizes. In fact beekeeping is really quite cool nowadays. Think of all those hedge fund managers in London, strolling out on to their roof terraces after a hard day making millions and starting on their bees. It’s a great stress buster and a chat about a queen excluder can be a real conversation stopper at parties. And beekeeping in urban areas can be more profitable than in the countryside.

Farmland nowadays has very few flowers, whereas everyone in towns has gardens and window boxes. In fact, in my opinion the best honey is made from a mixture of summer flowers.  It all kicked off really when we had a bee talk at Young Farmers. As chairman, I arranged for Barnsley Beekeeping Association to come and chat to us about bees. It only took a bit of encouragement afterwards and I found myself sat in the Barnsley Beekeeping meeting. I’m just glad that I took my friend Sue with me. She was really keen. Before I knew what was happening I was signed up for the Beginners’ Course. By the end of the six week course, a hive of bees was shoved into the boot of my car, I was patted on the back, wished every success – and sent off on my merry way. Panic! Even before I reached the main road I realised that six weeks wasn’t nearly enough. 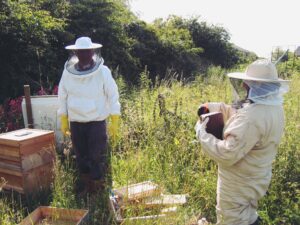 But there was nothing to do but get stuck in. I placed the hive in my cleared apiary site – round the back of the compost heap – and frantically started thumbing through the beginners guide to bees. It told me to feed them. Well, I’d completely lost my appetite, so I could have given them a helping of spag bol, but sugar syrup was the order of the day. Food means energy, and bees need a huge amount of energy to draw out their wax comb, for the queen to start egg laying and for foraging to begin. Pounds of sugar went into that hive. I could have bought shares in Silver Spoon. But the bees were thriving, and every day I could see them whizzing in and out, their little back legs loaded down with pollen. But then came the really scary bit. Opening the hive.

I togged up like Neil Armstrong on a space walk, smoker going like a power station chimney, and set to. Smoke is supposed to calm the bees, fooling them into thinking there’s a forest fire. Expecting to have to abandon the hive, they gorge themselves on honey and even a bee can’t sting and eat at the same time. How I didn’t gas them all I don’t know. It wasn’t so much a forest fire as an inferno, I couldn’t see a thing. Gradually I calmed down though and so did the bees. And it was fascinating. There’d been fifteen of us on the course and with the best will in the world we couldn’t see much. There were the eggs, newly laid, the pearly white C shapes of larvae, capped cells and even newly emerging bees, looking like little furry teddy bears, covered in grey fluffy down. My queen was marked, so she could be clearly seen, and my few bees had quadrupled in number. I was even privileged to see one of the bees doing the waggle dance, which is bee communication, giving the others in the hive directions to a new source of nectar. At that moment I loved my bees. I thought I’d got it made. 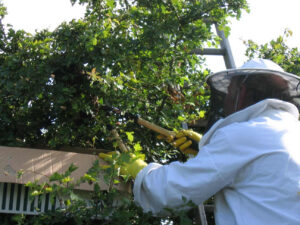 Cardboard box, loppers and a ladder: The swarm collection kit!

But then I got a call from Sue. Panic stations. Her bees had swarmed. For no apparent reason the bees had upped and off, lodging in a tree near the hive. And Sue’s queen had her wings clipped, so if she had come out with the swarm she couldn’t fly and had perished in the grass. This was a true beekeeping disaster. No one really knows why bees swarm. There are lots of reasons we do understand, but sometimes bees just do it. Sometimes it’s overcrowding, sometimes the hive can be infected, or the queen can be old, but sometimes it’s just the weather. Some bee breeds are more prone to swarming than others, and you can never tell exactly what bees you have. You know which queen you have, but you can never tell which drone, or male bee, mated with her. Sue’s queen must have mated with Genghis Khan, because those bees were nasty! The tell tale sign of a swarm is queen cells, which are like a long peanut shell stuck on the comb. Sue lives in an exposed place and the weather had been terrible, preventing her going into the hive as often as she would have liked. Once the queen cells are capped the bees force the old queen to get up and go. But this queen couldn’t go. That left Sue with a swarm and no queen and a hive with queen cells but no bees. I decided the best thing to do was to put the swarm back in the hive.

The swarm, shaken onto a white sheet and marching into an empty hive.

I got a ladder, climbed up the tree and shook the swarm into a cardboard box, smoking the branch to prevent the bees returning to the pheromone, or scent they’d left on the branch. Then I laid a tablecloth on the ground in front of the hive, poured the bees on to it and watched with amazement as they all walked back in. But what I know now, but didn’t know then, is that when they’ve swarmed they won’t go back home. You have to rehive them. After three more endeavours up the tree it was getting a bit monotonous. In the end, despite everything, Sue ended up with three hives of bees, not one of which was strong enough to produce any honey. If I could have taken out shares in Silver Spoon she should have bought the company. Meanwhile, back at Staincross Apiaries, my bees were busy. Very busy. One super went on – that’s a big box where the bees store the honey – and then another. To make sure you don’t get eggs and brood in with the honey you put a grid between the brood box and the supers – the queen excluder. The holes are too small for the queen to crawl through, so the worker bees alone can climb up into the supers and store the nectar. They mix this with the enzymes in their honey sac, put it in the cells of the honeycomb and take turns to fan air in and out of the hive, evaporating water and turning it into honey. But the summer honey flow had slowed up, and due to the bad weather this year the bees were slackening off for winter. So once again I was feeding the bees to make sure they had enough stores for the coming months. But, I had two supers of honey. I took one for me, and left one for the bees. My first year – and I had a crop! Incredible when you think I only had the bees as a nucleus. It just shows what bees can do when they have the right conditions.

Up on Sue’s hill though, things had gone from bad to worse. One of her new hives turned out to have no queen, so a friendly beekeeper came to the rescue with a new queen in a queen cage. In she went. Then we discovered there’d been a palace plot and the new queen was murdered. Either they had a queen, or this one didn’t suit them. Those bees were evil. With my bees you can practically stick your nose in the entrance in perfect safety, but Sue’s see you coming a mile off and send out a suicide squad. Because of course, when a bee stings tough human skin the sting can’t be pulled out again and the bee dies. But I didn’t feel sorry for this lot. Headbangers. So with our first year of beekeeping over, Sue and I had very different views. I think I’ had been given an easy ride, but because I’d been helping Sue I’d had an insight into the problems that were to come. There was only one thing I was absolutely certain of – bee books are only useful up to a point. Bees can’t read, but they’re certainly very good teachers. Soon my one hive became two and two became four and, before long, I was up to 20. 13years on and I’m rearing queens, giving talks, teaching children and adults and planning the next stage of my beekeeping journey: instrumental insemination!